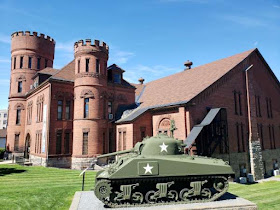 I'll be giving a free talk (with Q&A) about Juneteenth this Saturday, June 18, at 2 pm at the New York State Military Museum in Saratoga Springs. The museum store will be selling my books, which I can sign after the event.

The theme will be how the abolition of slavery became the overriding aim of the Civil War -- and the genesis, meaning and lasting importance of Juneteenth, our newest federal holiday. Something along the lines of what I wrote here for the Grant Cottage website -- but new and improved. I'll put up a blog post about what I said after I say it, along with my first Twitter thread, if I can figure out how to do that on a site where I'm still a newbie. I'm @RobertCConner or Robert C. (Bob) Conner on Twitter, with the James Montgomery book cover as my visual ID. (You can also find me on Facebook, though not on its Messenger service because I don't want to be hacked again.)

That Montgomery biography was well-reviewed by Civil War Books and Authors.

It's the second review I've seen. The first, by AR Gunners magazine, also was positive, and included both the Montgomery book and the reissued biography of Gordon Granger, both of which I'll talk about Saturday. (The Last Circle of Ulysses Grant may also get a mention.)

But mainly I'll talk about Juneteenth, how it is rightly seen as a celebration and memorialization both of the resilient courage of African-American culture in the wake of the Civil War, and of the immense national sacrifice which made that possible.