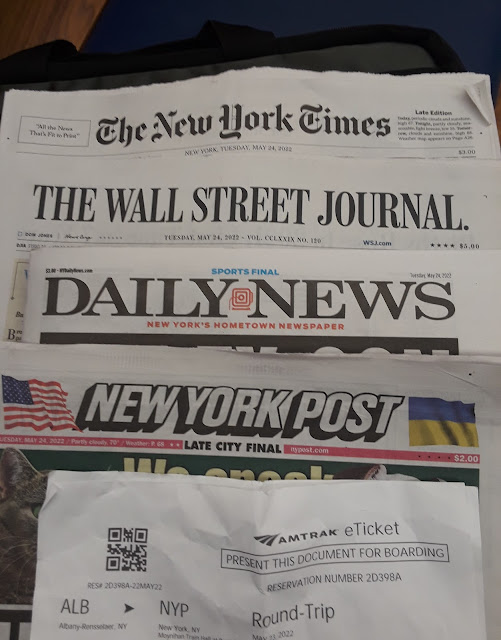 This is only Civil War related because I was speaking last night to the Civil War Forum of Metropolitan New York, an hospitable and appreciative bunch who put me up at the Bentley Hotel and fed me an excellent meal at Draught 55 restaurant. Join them if you live down thataway, and sign up for their upcoming bus trip to West Point.
Forgoing sightseeing, I have parked myself at the Moynihan Train Hall, the old post office building (with the iconic slogan carved around its top) where my grandfather Joseph Gaffney worked for many years. (His son, my uncle, was killed at the Battle of the Bulge.)
In September 1985 I had a memorable meeting with Senator Daniel Patrick Moynihan (after whom the station is named) at the tiny office of the Glens Falls Unit of the Albany local of The Newspaper Guild, which was seeking its first contract at The Post-Star, where I worked as a reporter. I also was chairman of the Guild unit. We organized most of the paper, and our first and only contract won the first ever benefits for its mailroom employees. Moynihan showed up in cagey support, and I tip my hat to him in the great beyond.
at May 24, 2022
Share