Jefferson Davis's proclamation regarding the alleged crimes of US Major General Ben Butler in New Orleans, released shortly before Christmas in 1862, has to be one of the least seasonally appropriate communications ever issued by a Christian, at least since the 17th century Catholic-Protestant wars.
Davis's rage at Butler (who ironically had supported him for the US presidency in 1860), led him to threaten much worse things than the Union general had ever done. According to the proclamation, Butler and all officers under his command "be declared not entitled to be considered as soldiers engaged in honorable warfare but as robbers and criminals deserving death, and that they and each of them be whenever captured reserved for execution."
The same fate (implied but not quite spelled out) was promised to "all negro slaves captured in arms" and their officers. (This would have a considerable impact on the career of US Col. James Montgomery, whose biography I am currently writing.)


In the East, that December, the pall of Fredericksburg lingered.


Grant was frustrated in the early stages of his Vicksburg campaign, both by Confederate cavalry commanders Forrest and Van Dorn, and the financial dealings of his own father. On Dec. 17, he issued the notorious anti-Semitic order, but it was quickly overturned by Lincoln and repented of by Grant.
Still farther west, in the far corner of Arkansas, the news was better, in part due to Frank Herron.
And in Boston, at the end of the year, Frederick Douglass awaited Lincoln's issuance of the Emancipation Proclamation.
Update: If you think Jeff Davis's proclamation makes an unsuitable topic for the season, I will double down by linking to this post by Rod Dreher about the Armenian genocide and other grim matters, which is the best Christmas piece I've read this year. 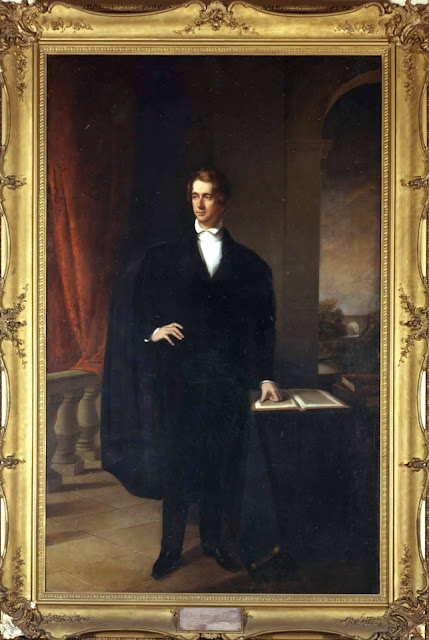 This portrait of William Henry Seward by Chester Harding can be found in the Hall of Governors at the New York State Capitol in Albany. It was painted more than two decades before today's date in 1862, when US Secretary of State Seward was awaiting his political fate, having submitted his resignation due to pressure from fellow Republicans in the Senate. This was not long after the disastrous Battle of Fredericksburg, which "depressed" Lincoln (as it does me).
Lincoln, however, managed to secure a resignation letter for Treasury Secretary Salmon P. Chase, and then wrote a joint letter to him and Seward requiring both of them to stay in the Cabinet. The two men were perceived as political opponents, with Chase more in tune with the radicals in the Senate. But both were effective Cabinet members whose services were needed by their country. Both, despite or because of their positions in Lincoln's shadow, have more distinguished records of statesmanship than many American presidents.
And whatever their politics or the verdict of history, I find Seward, like Lincoln, more personally sympathetic than Chase. So did Henry Adams, who has a splendid description -- written much later -- of him in 1860, when he looked more like the photograph below. It comes from the same book, The Education of Henry Adams, which includes a grossly obtuse and unfair analysis of Grant. In the quoted paragraph, the "Governor" is Seward, and the "private secretary" (to his father) is Adams.

"A few days after their arrival in December, 1860, the Governor, as he was always called, came to dinner, alone, as one of the family, and the private secretary had the chance he wanted to watch him as carefully as one generally watches men who dispose of one’s future. A slouching, slender figure; a head like a wise macaw; a beaked nose; shaggy eyebrows; unorderly hair and clothes; hoarse voice; offhand manner; free talk, and perpetual cigar, offered a new type — of western New York — to fathom; a type in one way simple because it was only double — political and personal; but complex because the political had become nature, and no one could tell which was the mask and which the features. At table, among friends, Mr. Seward threw off restraint, or seemed to throw it off, in reality, while in the world he threw it off, like a politician, for effect. In both cases he chose to appear as a free talker, who loathed pomposity and enjoyed a joke; but how much was nature and how much was mask, he was himself too simple a nature to know. Underneath the surface he was conventional after the conventions of western New York and Albany. Politicians thought it unconventionality. Bostonians thought it provincial. Henry Adams thought it charming. From the first sight, he loved the Governor, who, though sixty years old, had the youth of his sympathies. He noticed that Mr. Seward was never petty or personal; his talk was large; he generalized; he never seemed to pose for statesmanship; he did not require an attitude of prayer. What was more unusual — almost singular and quite eccentric — he had some means, unknown to other Senators, of producing the effect of unselfishness. " 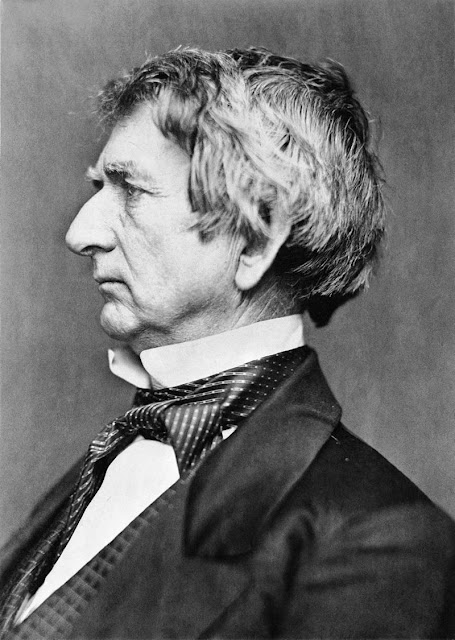 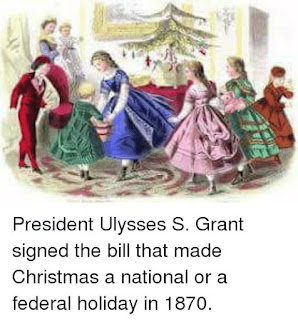 The bill also established the other major national holidays, but I'm not complaining that Christmas continues to get top billing. Obviously, you should celebrate by buying this book.

Some battles, like Fredericksburg, fought on this date in 1862, seem too depressing to contemplate. Major General Ambrose Burnside's Union army far outnumbered Robert E. Lee's Confederates, but lost 1,180 killed, 9,028 wounded and 2,145 captured or missing, compared to 608, 4,116 and 653 on the southern side, according to the Encyclopedia Virginia.
Lee himself would make similar failed frontal attacks at Malvern Hill, and on the third day at Gettysburg. So would Grant at Vicksburg (despite the brilliance of the preceding campaign) and Cold Harbor.
Burnside did have better days, at Roanoke Island and Knoxville. But he was, as everyone, including at some level himself, recognized, not up to the task of command, to the awful responsibility which he was permitted to carry for far too long. Few would be up to it -- none of us armchair generals. Yet Lee and Grant, whatever their blunders, were. (Burnside was finally taken out of active service in the summer of 1864, after the Battle of the Crater during the siege of Petersburg.)
The gospel hymn says we're gonna lay down our swords and shields down by the riverside, and ain't gonna study war no more. World War I makes me feel like doing that. The top British general Douglas Haig, like Burnside on the winning side, repeatedly sent many thousands of his men to die in useless assaults. I am not interested in his defense. 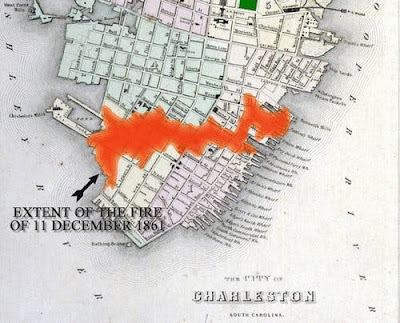 Most of the wartime damage to the city of Charleston, SC, came not from federal shells but an accidental fire on today's date in 1861. "The fire burned over 540 acres, 575 homes, numerous businesses, and five churches," and rousted General Robert E. Lee from his hotel.
A Union shell probably did blow up the powder magazine on Fort Sumter in Charleston harbor exactly two years later, killing 11 Confederate soldiers and wounding 41.
The city and fort were abandoned by the Confederacy in February 1865.
at December 11, 2018 No comments:

Abraham and Elizabeth Van Rensselaer Ten Broeck were presiding today, in these 1763 portraits by Thomas Mcllworth, over Albany's Ten Broeck Mansion, which they didn't get around to building until 1797.
Also in evidence were Christmas decorations and a Daniel Huntington portrait of Harriet Langdon Roberts Parker (1814-1889), who among other things was great-grandmother of Mayor Erastus Corning. 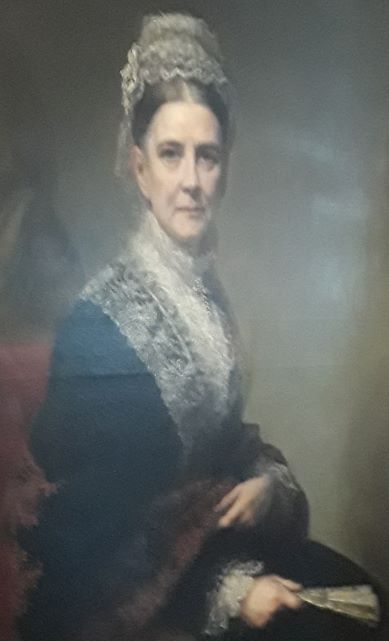 The late 19th-century addition on right fits in well with the Federal style original. Architects then, unlike their modernist successors (who would probably have stuck on a brutalist carbuncle), did not find it is dishonest to fit in with a superior original.(Previous photos mine. This one CC-BY-SA-3.0/Matt H. Wade at Wikipedia ) 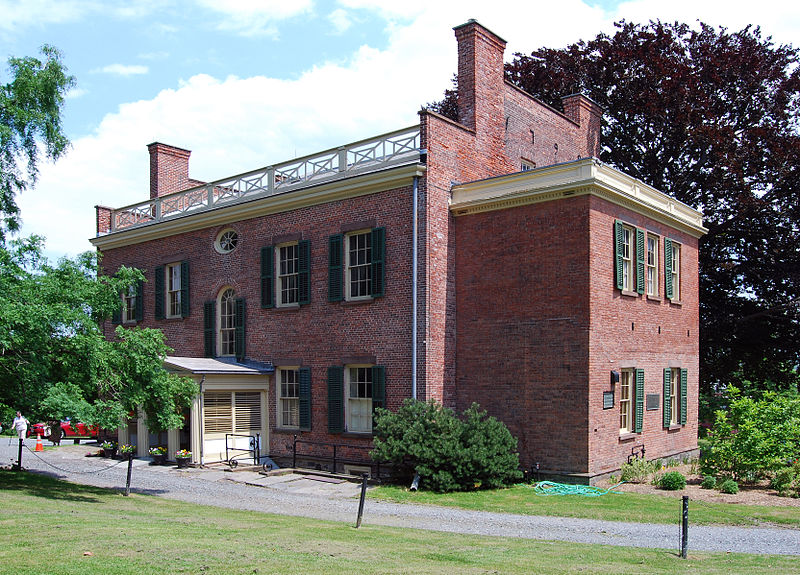 That's a rear view. The entrance is a less successful addition.
Upcoming events at the mansion next weekend include the Helderberg Madrigal Singers and the Musicians of Ma'alwyck.

The Colorful History of the Second Mrs. Pillow 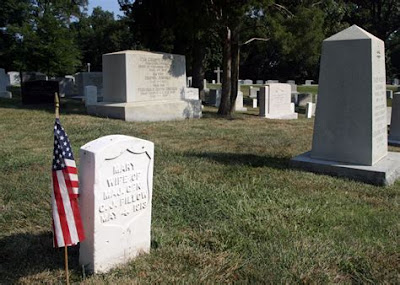 Readers of Grant's memoirs will probably recall that he held a low opinion of his Confederate counterpart and opponent in late 1861 and early 1862, Gideon Pillow. This blowhard was a model of downward mobility, serving as a politically connected (to President Polk) major general in the Mexican War, but not rising above brigadier in the Civil War. A very rich speculator and lawyer, he managed to lose all his money, leaving his much younger second wife to raise their children in straitened circumstances at his death in 1878.
Pillow was buried in Tennessee, as was his first wife, although not in the same cemetery. His second wife, however, as can be seen above, managed to find a place in Arlington National Cemetery, on the strength of her late husband's Mexican War service. Her career as a widow included an adulterous and litigious relationship which led to the homicide of her lawyer by her onetime lover.