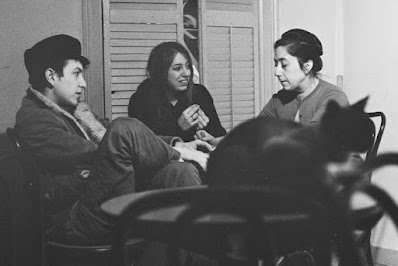 The photo by Joe Alper shows Bob Dylan, his girlfriend Suze Rotolo and Lena Spencer in January 1962. I noticed it last night on a wall at Caffe Lena (founded by and named after Spencer) in Saratoga Springs, NY, where Dylan performed that month and the previous June.
I was at Caffe Lena for a staged reading of a new play, Grant's Ghost by Warren Schultz, whom I'd never met before. Our mutual friend Larry Levine was one of the actors. The play is about the death of Ulysses S. Grant in 1885 on Mount McGregor, a few miles north of Saratoga Springs. I liked it and said so, with particular praise for the "ghost" character, Grant's father Jesse -- though I inevitably had a few nits to pick.
Oddly, in the late 1990s I also started writing a play about more or less the same things, which almost 20 years later I turned into a novel, The Last Circle of Ulysses Grant. The rather more celebrated playwright John Guare wrote about the same general subject in 2002 in A Few Stout Individuals. His play is set in New York City before Grant's final days, while my novel takes place both there and on Mount McGregor.
My other two Civil War era books are biographies, of James Montgomery and Gordon Granger, and I know some history buffs and students of warfare who are suspicious of historical fiction. But an imaginative sympathy is required for both kinds of writing.
Consider the great Russians (whom I am obviously not measuring myself against). Of course there is War and Peace by Leo Tolstoy, but I'm thinking of another novel which I'd barely heard of until my cousin Steve Pinto gave me a copy about a year ago: Life and Fate by Vasily Grossman. It's the best book I've ever read about World War II, taking in the Nazi Holocaust and Soviet forced labor camps, and told through gripping, tragic, empathetic, fictional stories that resound with truth.
Six decades and a Nobel Prize on, Dylan remains a profoundly creative artist. And Grant, born 200 years ago today, who wrote one great book at the end of his life, is still an inspiration. 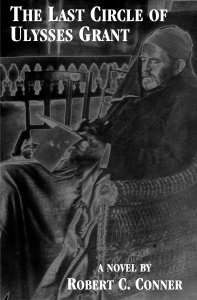 My first speaking gig for the new Montgomery book is 7 p.m. this Thursday (tomorrow) at the Ulster County Civil War Round Table in Kingston, NY.
at April 26, 2022 No comments: 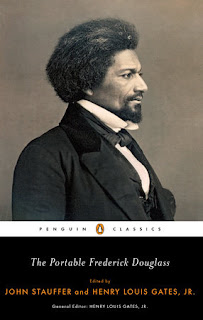 Frederick Douglass gave a speech at Cooper Union in New York City on February 6, 1863,  and published the text in March in his own abolitionist newspaper Douglass' Monthly.

It is, among other things, a magnificent defense of free speech in the middle of America's most costly war (to this day), when the Union cause in that war remained very precarious. It was written by a man who as an enslaved youth had taught himself to read in Maryland, before escaping North in 1838.

The speech was titled "The Proclamation and a Negro Army." Its context is the new light of Abraham Lincoln's Emancipation Proclamation, which coincided with increased Copperhead agitation against the president, the war and the anti-slavery movement.

"Parties have to some extent changed sides on the subject of free speech. The men who would a few years ago mob and hang Abolitionists for exercising the sacred right of free thought and speech, have all at once become the most urgent for the largest liberty of speech. And I must say, detestable as are the motives that have brought them to the defense of free speech, I think they have the right in the controversy. I do not know where I would limit the simple utterance of opinion. If any one is base enough to spit upon the grave of his mother, or to shout for Jefferson Davis, let him, and do not lock him up for it. ...

"Fortunately for mankind, error is a bad reasoner. It can fight better than it can reason. ... Such is my confidence in the potency of truth, in the power of reason, I hold that had the right of free discussion been preserved during the last thirty years, had the Northern parties and politicians been half so diligent in protecting this high constitutional right, from the first ruthlessly struck down all over the South, as they have been in framing laws for the recapture of poor, toil-worn and foot-sore slaves, we should now have no Slavery to breed Rebellion, nor war, black with dismal terror, to drench our land with blood, and fill our dwellings with sorrow and mourning. Slavery would have fallen as it fell in the West Indies, as it has fallen in the Free States, as it has fallen in Russia, and elsewhere, and as it will fall everywhere, when men can assail it with the weapons of reason and the facts of experience."