Another Review of Montgomery Biography

The review below is from the spring/summer edition of The Journal of America's Military Past.
The two prior reviews were by Civil War Books and Authors and ARGunners Magazine.
James Montgomery: Abolitionist Warrior, by Robert C. Conner.
Havertown, Pa.: Casemate, 2022. 210 pp., $34.95.
When the Civil War broke out in April 1861, there was one region
of the country where bitter fighting had been going on since 1855.
That region, nicknamed “Bleeding Kansas,” straddled the lower
two-thirds of the Missouri-Kansas border, where anti-slavery
“Jayhawkers” from the Kansas Territory and pro-slavery Missouri
“Border Ruffians” had been skirmishing for about six years to
determine popular sovereignty. Jayhawkers, who wanted Kansas to
enter the Union as a free state – not accomplished until January 1861
— rode into Missouri, murdering slave owners, burning their farms,
and liberating their slaves, while Border Ruffians rode into Kansas
Territory to retrieve slaves and otherwise exact revenge. One of the
most important leaders in that deadly struggle was Kansas’s James
Montgomery, whose active life is covered in this biography by Robert
Conner, a former journalist.
Born in Ohio in 1814, Montgomery moved to the Kansas Territory
in 1854, after having lived in the slave states of Kentucky and
Missouri. He bought a farm in Linn County, which bordered
Missouri, and when not farming, he served as a Campbellite
(Christian) preacher. Montgomery was a staunch abolitionist, and he
soon became a leader in southeastern Kansas’s anti-slavery community.
He became associated with the notorious John Brown and
“came to share Brown’s view that a civil war to free the slaves was
both inevitable and justified.” (p. 4)
After the Civil War finally broke out, Montgomery was commissioned
as the colonel commanding the Third Kansas Infantry
regiment, which was assigned to James H. Lane’s Kansas Brigade
(Lane was also a U.S. senator). In 1863, Montgomery took command
of the Second South Carolina Infantry (later designated as the 34th
U.S. Colored Infantry), a regiment that was formed from liberated
slaves. With that unit, he fought in the Department of the South,
including participating in the 1863 Combahee River Raid in South
Carolina, where he worked with the famous African American
abolitionist Harriet Tubman to liberate almost 800 slaves. In February
1864, Montgomery commanded a brigade at the Battle of Olustee,
in northern Florida. That fight resulted in a Union defeat, but
his brigade fought well and prevented the battle from becoming a
complete rout.
Illness caused Montgomery to resign his commission, but shortly
after returning to Linn County in September 1864, Montgomery
returned to uniform for one final campaign. Confederate Maj. Gen.
Sterling Price was leading a 12,000-man force westward across the
state of Missouri and threatening federal strongpoints on the border
with Kansas — Fort Leavenworth, Kansas, and Kansas City,
Missouri. In early October, Governor Thomas Carney of Kansas
called up the Kansas State Militia (KSM), and Montgomery took
command of the KSM’s 6th Regiment, which rushed north to the
Kansas City area to help prevent “Old Pap” Price from invading the
Sunflower State. Montgomery’s citizen-soldiers fought well in the
actions that ended with the Battle of Westport. In defeat, General
Price’s ragtag column then quickly retreated south along the border,
passing within a few miles of Montgomery’s farm. Thus ended the
Price Raid, and the decade of fighting in that part of the country
effectively came to an end. Montgomery returned to civilian life at his
farm, and he died there in 1871.
The author shows James Montgomery to have been a brave leader,
who labored in the fringe areas of the war to defeat the Confederacy
and to end the scourge of slavery. The book would have benefitted
from at least two maps, one depicting the actions of Montgomery and
his units in the Department of the South and one showing the closing
days of the Price Raid, but Civil War buffs will still find a lot to enjoy
in reading about this abolitionist warrior.
Roger D. Cunningham 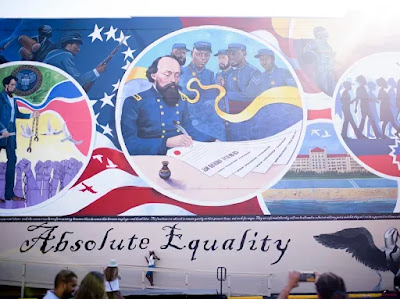 August 1 note: NPR has now added an editor's note to the story linking to this blog post.

"Four enduring myths about Juneteenth are not based on facts", asserts the headline of a June 20 National Public Radio piece which was brought to my attention today by Champe Granger, great-great granddaughter of Gordon Granger, whose biography by me was published by Casemate in 2013 and reissued in paperback this year.

The NPR journalist, John Burnett, claims the Juneteenth order was written not by Granger but Frederick Emery, "who hailed from an abolitionist family in Free Kansas." Burnett's sole source is Ed Cotham, who apparently thinks Emery's background is sufficient evidence for this claim.

In reality, Granger was a major general commanding all federal troops in Texas. As a major on his staff, Emery was a much junior officer essentially acting as Granger's secretary. He may have written out the order and advised on its wording, but Granger would have paid very close attention to the language, including the reference to freedom meaning "an absolute equality of personal rights and rights of property between former masters and slaves." Those words were used not because of anyone’s naïve idealism, but because the Confederate ruling class of Texas remained unconvinced that the federal army and government intended to enforce abolition and equal rights, and Granger decided it was necessary to clarify the matter.

The language is stronger than Lincoln’s Emancipation Proclamation, which was the legal authority under which Granger acted, and also stronger than the June 13 order from Maj. Gen. Philip Sheridan, his military commander (who was in New Orleans). Neither Lincoln nor Sheridan said anything about the former slaves having "absolute equality" of human rights with their former masters.

NPR says Granger’s order “also contained patronizing language intended to appease planters who didn’t want to lose their workforce.” This refers to the last part of the order, which says: “The freedmen are advised to remain quietly at their present homes and work for wages. They are informed that they will not be allowed to collect at military posts and that they will not be supported in idleness either there or elsewhere.” Maybe I shouldn’t pick on NPR, because the National Archives has called this “racist language,” in apparent ignorance of the context, and other outlets have taken up the same line.

While most of those two sentences come directly from Sheridan’s order, Granger also made a crucial change to soften the impact. Sheridan had ordered Granger to tell “freedmen that they must remain at home,” whereas Granger only advised them to do so. He recognized the contradiction, that you couldn't both tell the slaves they were free and tell them they "must" stay where they were. But it wasn't bad advice for the time being. Most of the Union troops being sent to Texas were going south to the border with Mexico, which had its own civil war under way in which Generals Ulysses S.Grant and Sheridan (but not the political leaders in Washington) were inclined to intervene. There were precious few soldiers to maintain law and order and enforce emancipation in the huge, unconquered state of Texas. Granger was struggling just to supply his own troops and horses, and his advice to the former slaves to stay put and work as “hired labor” was a recognition of reality, an attempt to prevent hunger and uphold public safety, as there were many former Confederate soldiers travelling in the state.

Granger and his comrades had just engaged in a long and bloody war at first for the purpose of defending the Union while stopping the spread of the slave power -- and then by 1864 they were fighting outright for the abolition of slavery in America. To now judge them along with leaders such as Lincoln as insufficiently anti-racist by 2022 standards of political purity, is to do a serious disservice to historical understanding.