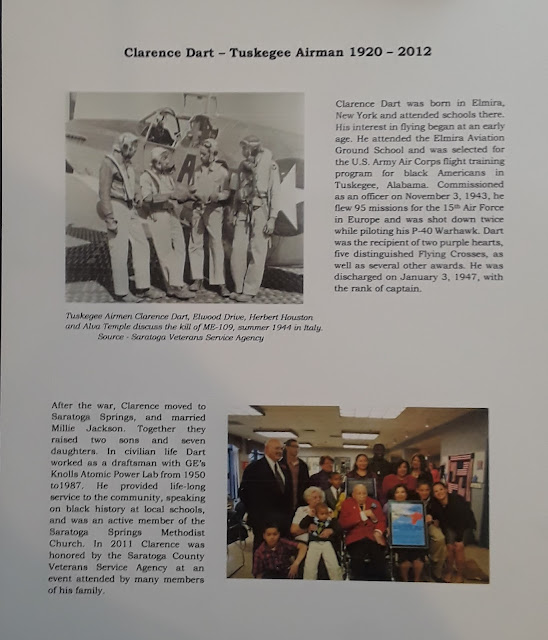 The Tuskegee Airmen obviously didn't fight in the Civil War, but the U.S. armed forces were still segregated when Clarence Dart served in the 1940s. His extraordinary war record and subsequent life are described briefly above, in a display from a current exhibit at Brookside Museum in Ballston Spa, NY, called "Black Experiences in Saratoga County 1750-1950".

That life, as you can see, extended well after 1950, including a long and fruitful marriage, and service to causes such as the Charlton School for Girls, the Salvation Army and the Methodist Church.

Lieutenant Colonel Dart was duly (if belatedly) recognized by museums, media and elected officials from the state Senate to Presidents George W. Bush and Barack Obama.

But little is known about the vast majority of African-American troops in the Civil War who were led by officers such as James Montgomery, Gordon Granger and U.S. Grant. (That last link goes to a novel about Grant's last months, partly set in Saratoga County, which Brookside currently has for sale. Brookside is also sponsoring an April 6 Zoom program with Ben Kemp portraying Grant's eldest son Fred.)

The new federal holiday of Juneteenth comes from Granger's order of June 19, 1865 in Texas, proclaiming Emancipation and, in his words, "an absolute equality of personal rights and rights of property between former masters and slaves". Unlike Montgomery, Granger had not been an early abolitionist. President Grant, by the end of his second term, was not able to secure Reconstruction as a permanent guarantee of the equal rights which had been pledged. But the freed slaves, most of them illiterate, and their descendants held to an accurate understanding of this history. As a result, spurred by nonviolent Black leadership of the mid-20th century civil rights movement, the promise of Juneteenth was largely fulfilled. 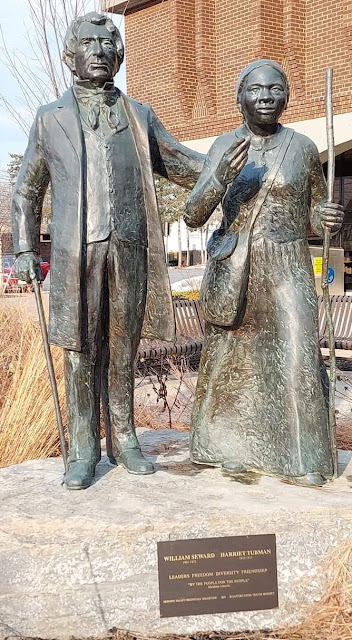 These splendid statues by Dexter Benedict are still looking good, almost three years after their installation outside the main branch of the Schenectady public library in 2019. The wife (who took the photo) and I were in town yesterday to go to the opening night of Stephen Sondheim's "Merrily We Roll Along" at the Schenectady Light Opera Company (running through March 27 -- check it out).

William H. Seward is best known for the U.S. purchase of Alaska in 1867, but his long, admirable  record as a statesman is most distinguished by his service in Abraham Lincoln's Cabinet. He graduated from Union College in Schenectady, and in later life was a friend and ally of Tubman's. Other statues of them both, separate but not far from each other, now stand in Auburn, NY.

Another friend and ally of Tubman's was Col. James Montgomery, whose African-American 2nd South Carolina Regiment was guided and assisted by Tubman and other Black civilians on the Combahee River raid, which liberated almost 800 slaves. The Civil War service of both Tubman and Montgomery is, in my opinion, often overlooked by historians and students who focus on their prewar anti-slavery activities. But they freed far more enslaved people on June 1-2 1863 than in all the rest of their careers, and their contributions to the Union war effort are the most significant things they did.

Casemate will publish in April 2022 my biography of Montgomery. See more at their website here.

Casemate is also reissuing as a paperback my 2013 biography, General Gordon Granger: The Savior of Chickamauga and the Man Behind "Juneteenth". (See here on their website.)
And my 2018 historical novel The Last Circle of Ulysses Grant is still available here from Square Circle Press.
at March 19, 2022 1 comment: 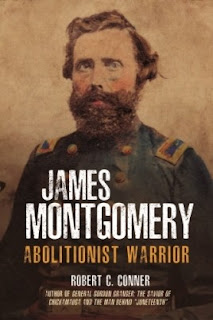 Casemate will publish in April 2022 my biography of James Montgomery, the Kansas abolitionist and Civil War soldier. See more at their website here.
Casemate is also reissuing as a paperback my 2013 biography, General Gordon Granger: The Savior of Chickamauga and the Man Behind "Juneteenth". (See here on their website.)
And my 2018 historical novel The Last Circle of Ulysses Grant is still available here from Square Circle Press.
So after a two-year gap I will be restarting this blog, and setting up talks in person and/or online to promote the new book and the old ones. See you around, I hope.
at March 04, 2022 2 comments: