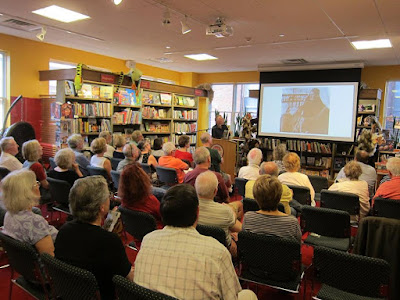 I'll be at the Chronicle Book Fair this Sunday, Nov. 4, from 11 to 3 at the Queensbury Hotel in downtown Glens Falls. I'll be doing a five-minute reading between 1 and 1:30 (if no kids are around, I'm thinking a WT Sherman-Mary Audenried sex scene from the novel), then will be on a panel discussion from 2 to 3. I will also have discounted books for sale, both the 2018 novel The Last Circle of Ulysses Grant, and the 2013 biography of Civil War General Gordon Granger.
Then on Wednesday, November 14, I'll be in the great city of Albany, at Swifty's Pub on Everett Road, to talk to Da Buffs. That's a Civil War  dinner and discussion club (Barb and I are members). But you too can turn up at 6:30 and order off the menu (try the reuben spring rolls), then check out my new and improved talk and PowerPoint on the Grant book like the one I did in Saratoga Springs (see picture above) earlier this year. Books for sale at the Swifty's event, too, at the same price as at the book fair. 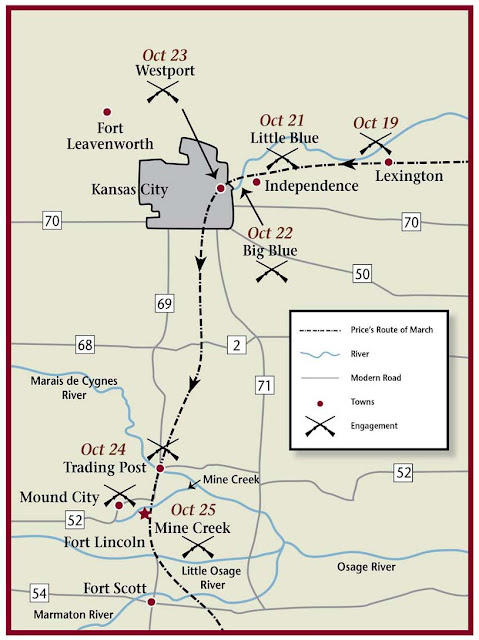 On this date in 1864, Sterling Price's Confederate army was camped five miles south of Pineville, Missouri, near the Arkansas line, over which it would retreat the next day before heading to Indian Territory. The soldiers and guerrillas in his force would not return to Missouri until the war was over.
Price had risen to fame in the Mexican War, during which he ruthlessly suppressed the Taos Revolt against Indian and Hispanic forces.
His Union opponents in the Civil War had later connections to the Indian wars. US Major General Samuel Curtis was victor of the Battle of Westport (today a pleasant part of Kansas City) against Price on Oct. 23, 1864. Curtis also has some responsibility for the Sand Creek Massacre of Indians in Colorado the next month (even though he wasn't there), due to his harsh orders to a subordinate, Col. John Chivington, who bears primary blame.
In early 1862, Curtis had defeated a Confederate army including Price and an Indian cavalry force at the Battle of Pea Ridge in Arkansas, and Chivington played a key role in defeating the Confederate invasion of New Mexico at the Battle of Glorieta Pass.
Curtis' chief subordinate in the 1864 campaign against Price, James Blunt, was accused of corruption in his dealings with Indians after the war. In 1863, Curtis' son Zarah was killed when serving under Blunt, by Quantrill's Confederate guerrilla raiders. In 1862, Blunt was fighting alongside Frank Herron, a major character in The Last Circle of Ulysses Grant.
US Major General Alfred Pleasonton's cavalry (dispatched by Rosecrans) was harrying Price from the rear at Westport, and he was then in independent command at the Battle of Mine Creek as the Confederates retreated south. In both of these Union victories, Pleasonton's subordinate Lt. Col. Frederick Benteen played a key role.
Pleasonton had served earlier in the Army of the Potomac. It seems to me his record there is unduly criticized, but one move he made which undoubtedly worked out well was the June 29, 1863, promotion of George Armstrong Custer from captain to brigadier general. This was just before the Battle of Gettysburg, in which, as in subsequent Army of the Potomac battles, the new young general would play a major and positive role.
After the Civil War, though, as colonel of the 7th Cavalry, Custer's record was much less stellar. Some blamed (and still blame) Benteen for failing to rescue him in 1876 at the Battle of Little Bighorn, but I don't think the criticism justified. 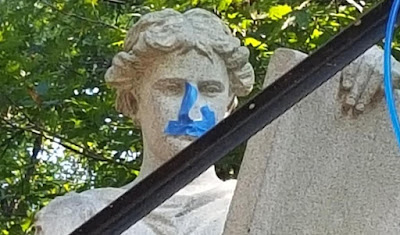 The Glens Falls Post-Star reports that the only statue depicting a female on the Gettysburg battlefield got a "nose job" repair last month. Clio, on Culp's Hill, represents the muse of history and the 123rd New York Volunteer Infantry, whose recruits came from Washington County.
Among them was Rice Bull, whose book I keep meaning to read. He is buried in Oakwood Cemetery, north Troy, along with other Civil War soldiers including his sometime commander, the Rock of Chickamauga. 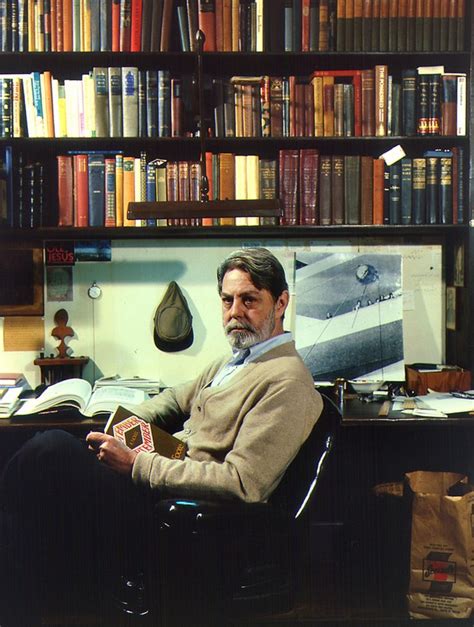 Shelby Foote was a novelist before he was a historian, and at least one of those novels, Shiloh, was about the Civil War. Then he wrote the classic three-volume Narrative history of the war, and was the key talking head in Ken Burns' excellent PBS documentary.
A Facebook group I belong to, The Civil War Buff (as opposed to Da Buffs, an Albany, NY, dinner group to which I will make a presentation and try to sell books on Nov. 14), has been discussing Foote. While I think Foote's lack of footnotes is a legitimate issue for critics to raise, as well as, to a lesser extent, his inclination toward the Confederate side of the conflict, I still defend him as one of the war's great historians. He wrote well, with a vivid and accurate sense of the great drama of those events, while rigorously pursuing the truth as he saw it.
While most people on the Facebook thread were admirers of Foote, others said fiction "overlapped" into the history, or compared him unfavorably to another historian who "has a PhD and taught history at the University of Virginia. Shelby Foote wrote books."
I said this: "Shelby Foote's imagination made him a better historian. Not because he made it up, but because, as David McCullough pointed out, a historian needs to imagine what life was like for the people he writes about. He needs to get inside their heads."
And there are limits to biography. 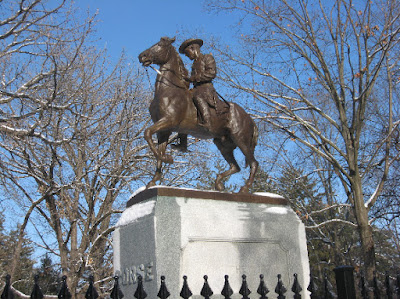 The Presbyterian hymn by Philip Bliss inspired the labor union song, which in my Newspaper Guild days I heard Joe Glazer sing at the former AFL-CIO campus in Silver Spring, Maryland, and myself sang to my children at home.
Bliss was inspired by a garbled version of a message dispatched from the not notably religious or labor-friendly William Tecumseh Sherman to Brigadier General John Corse in Allatoona, Georgia.
On today's date 154 years ago, Sherman dispatched Corse to defend Allatoona and Confederate Lt. Gen. John Bell Hood sent Major General Samuel French to attack and capture the same place. The fighting commenced the next morning, Oct. 5, after Corse declined to surrender.
Allatoona was a supply depot on the rail line from Chattanooga, Tennessee, to Sherman's army in Atlanta.
Corse's outnumbered Union men won a defensive battle, which may have encouraged Grant to let Sherman march to the sea. And Hood eventually continued on his way to Tennessee, where his army was crushed by Union victories south of Nashville in November and December.