On this date in 1861, newly promoted US Army Colonel George Thomas,serving under Major General Robert Patterson, was stationed in southern Pennsylvania and preparing to invade Virginia, his home state. It was exactly that prospect, of potentially being required to fight against Virginia, which had recently prompted Thomas' good friend, Col. Robert E. Lee, to resign his US Army commission and join the Confederacy.
Thomas' former pupil at West Point, J.E.B. Stuart, now a Confederate lieutenant colonel, wrote on June 18 to his wife: "Old George H. Thomas is in command of the cavalry of the enemy. I would like to hang, hang him as a traitor to his native state." Later in the war another senior Confederate, Braxton Bragg, formerly a Mexican War comrade of Thomas and now commanding the army opposed to his, refused to accept a communication from him because he, Bragg, regarded Thomas as a traitor.
On July 2, 1861, Patterson's army including Thomas would skirmish with Confederates including Stuart, and commanded by newly promoted Brigadier General Thomas J. Jackson (not yet "Stonewall") at Falling Waters.
Four years later, Stuart and Jackson were famous generals who had been slain in battle, and Falling Waters was in the new state of West Virginia. A federal grand jury in Norfolk, Va., indicted Lee and other Confederate generals for treason, and President Andrew Johnson wanted the prosecutions to proceed. But Grant said that would violate the surrender terms at Appomattox, which had been warmly approved by Abraham Lincoln. He carried the day. Lee and the others remained free.
Despite Thomas' loyal and successful service in the Civil War and Reconstruction, he had a prickly relationship with Grant. Nor did he ever manage to restore good relations after the war with his southern family, especially his beloved sisters, who had turned their pictures of him to the wall. In 1831, when Thomas had just turned 15, he and those sisters and their widowed mother had fled and hid from the Nat Turner slave rebellion.
Thomas is buried in his wife's home town of Troy, NY, at her Kellogg family grave site. President Grant and his Cabinet were among the 10,000 mourners there. 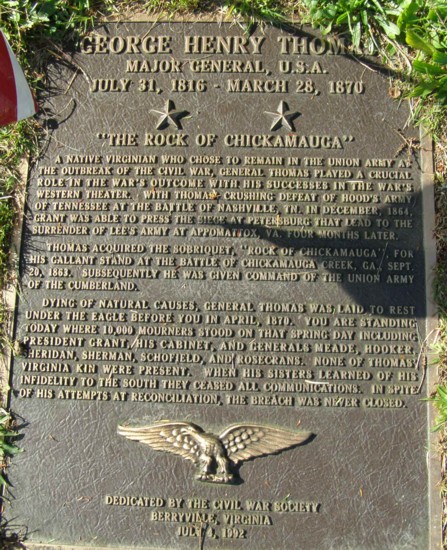 In writing about Thomas after the war, including in his Memoirs in 1885, Grant struggled to be fair. I try to get inside that writing and thinking process in The Last Circle of Ulysses Grant. 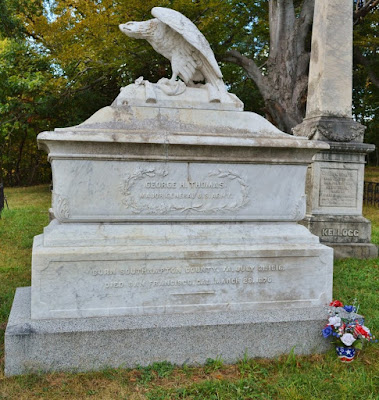 There is an 1879 statue of Thomas closer to his home, in Washington, DC. The US Treasury Note at the top of this page dates from 1890. 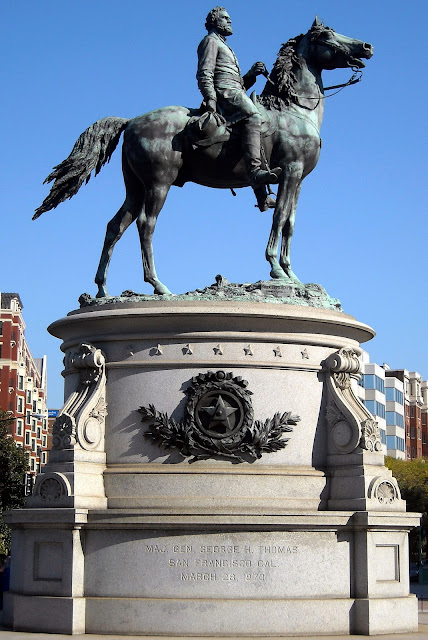