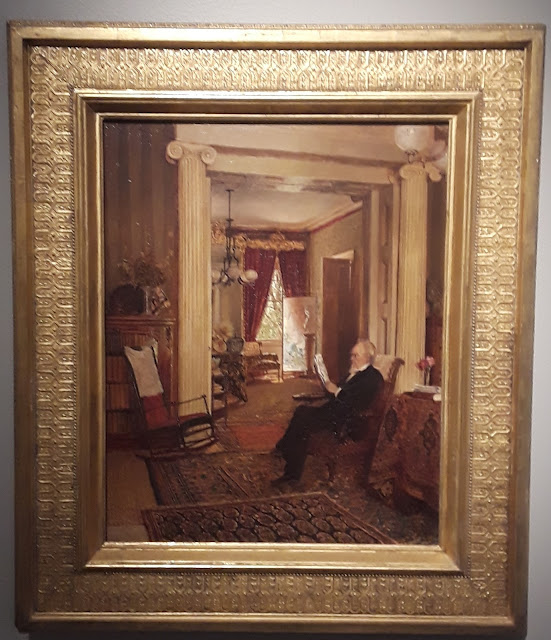 This painting by Walter Launt Palmer, currently on view at the Albany Institute of History and Art, dates from 1878, i.e. 13 years after Appomattox. It shows the interior of the Ten Broeck Mansion in Arbour (or Arbor) Hill, Albany, NY, where the prominent banker Thomas W. Olcott sits reading in his library. Olcott's prosperity is obvious, and this 2017 post by Dr. Kathleen Logothetis Thompson, from the Civil Discourse blog, shows the important behind-the-scenes role he played from Albany in recruiting and supporting Union soldiers during the war. Such prosperity and power exercised by many men like Olcott, is part of the reason why the Union won the war. 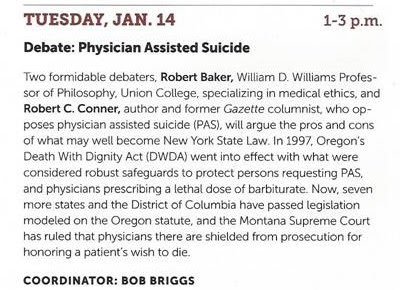 As can be seen at left, I'll be participating in a debate on assisted suicide in January 2020 at Union College in Schenectady, NY -- which has nothing to do with the Civil War. (See here on my other blog for more details.)
But when you're writing a book, as I am now a biography of Col. James Montgomery, other topics seem to connect to it, and it occurs to me I don't really understand why the Kansas soldier-politician Jim Lane, then serving as a US senator, killed himself in 1866.
Lane was linked to Montgomery in the Bleeding Kansas troubles in the late 1850s. When the war came in 1861, Lane was Montgomery's commander in their first campaign, in Missouri. It was a trail of brutality, especially at Morristown and Osceola, not reflecting well on either of them. But they served through the war, Montgomery as a soldier and Lane in politics, and their side won. Montgomery then went back to his farm, family and faith, while Lane had been re-elected to the Senate.
Sure, Lane had political problems in 1866 -- siding with President Andrew Johnson had angered his radical Republican supporters. But that's hardly enough motivation for suicide. Lane's successor, another Union veteran named Edmund G. Ross, famously cast the crucial Senate vote to acquit Johnson in his impeachment trial in 1868. That got Ross lauded as one of the heroes of John F. Kennedy's 1956 book Profiles in Courage. It also got him defeated for re-election, but years later he served as territorial governor of New Mexico. Unlike Lane, he didn't seem to be battling personal demons.
at November 21, 2019 3 comments: