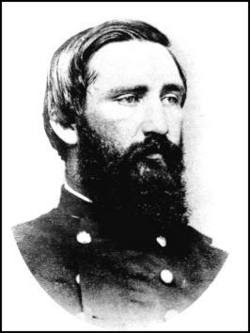 Not the pretend colonel who founded the fried chicken chain, but William P. Sanders, a Kentucky-born West Pointer who on this date in 1863 was leading a successful raid in the vicinity of Knoxville, Tennessee, having advanced south from Kentucky under orders from Major-General Ambrose Burnside. He would turn 30 in August.
Sanders had served in the Peninsula Campaign and at Antietam before moving west. He helped Burnside capture Knoxville in early September, 1863, and defend it against Confederate General James Longstreet's advance in November. Sanders was actually serving as a brigadier general when he was mortally wounded on Nov. 18, dying the next day. The US Senate had not yet confirmed his promotion. Fort Loudon was renamed Fort Sanders in his honor, and it successfully held off Longstreet's assault on Nov. 29.
The Knoxville campaign influenced major events to its southwest, helping the Army of the Cumberland recover from its defeat at Chickamauga and win the Battle of Chattanooga.
at June 21, 2019 No comments: 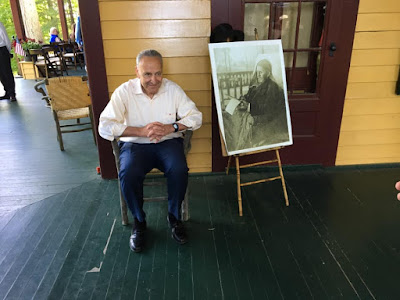 It's obviously good news that Grant Cottage (in Saratoga County, NY) was visited yesterday by one of the most influential politicians in the country, New York Senator and US Senate Minority Leader Chuck Schumer. He pledged to press for the site's designation as a National Historic Landmark, making it potentially eligible for federal funding.
The cottage is facing challenges, especially regarding security, in the wake of the closure four years ago of the state prison which used to occupy the top of Mount McGregor. People like Schumer, and Gov. Andrew Cuomo, can help it meet those challenges.
As I have long thought, the best long-term solution is to renovate the upstairs (never part of public tours) and bring back live-in caretakers. For most of the cottage's history, caretakers lived upstairs, and bringing them back was too briefly discussed when the prison closure was announced.
A new, full-time caretaker, with housing as part of their salary, is the way to keep the cottage safe now and into the future, in the grand tradition of Oliver Clarke and Suye Narita Gambino.
For more on the latter, and her nephew Kenjiro Yoshida who served with the US Army and was killed in action in Europe during World War II, come to the July 7 talk by Steve Trimm. Steve, who wrote the small book I link to above (which is for sale in the Visitor Center), is also an expert on the history of Oliver and Martha Clarke. 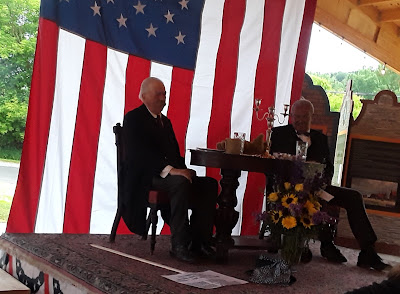 Theodore Roosevelt and Booker T. Washington, as portrayed by Paul Stillman and Clifford Oliver, on stage Saturday at the new pavilion next to the Knickerbocker Mansion, in Schaghticoke, Rensselaer County, NY. (If any uncertain spellers live in that vicinity, do they give up writing in despair? Even if they get the locations right, there's still the question of Knickerbocker of Knickerbacker.)
The short play has the ex-president and the civil rights leader (who founded the Tuskegee Institute) speechifying and reminiscing about their controversial White House dinner meeting of 1901, and the state of race relations in the first term of pro-segregation President Woodrow Wilson.
Washington's career was jump-started in the 1870s by the former Civil War soldier Samuel C. Armstrong. Roosevelt was the first president since the Civil War to have been too young to fight in it, but made his name soldiering in Cuba. His "splendid little war" description of that conflict may grate to modern ears, but, like Henry Kissinger, he wound up with a Nobel Peace Prize.
at June 17, 2019 No comments:

Judah Benjamin was "called to the bar" in London on today's date in 1866, when he was in his mid-50s, and went on to a dazzlingly successful legal career there. (He is pictured above a few years earlier, on the Confederate two-dollar bill.)
Benjamin had risen from humble origins in Charleston, SC, and New Orleans to become a US senator, until he resigned in his second term when Louisiana seceded. A close ally of Jefferson Davis, he served the Confederacy as attorney general and secretary of war, then from 1862 to 1865 as secretary of state. Whether in the USA, the Confederacy or the United Kingdom, he had to overcome anti-Semitic prejudice.
While Benjamin was among those Confederates toward the end of the war who were prepared to recruit slaves for the Army and promise them freedom, he was also a determined defender of slavery, and after the war (in correspondence) an opponent of black political rights and critic of Reconstruction.

It was fortunate for the Union cause that his counterpart as US secretary of state was the equally brilliant and even more effective William H. Seward.
at June 06, 2019 No comments: