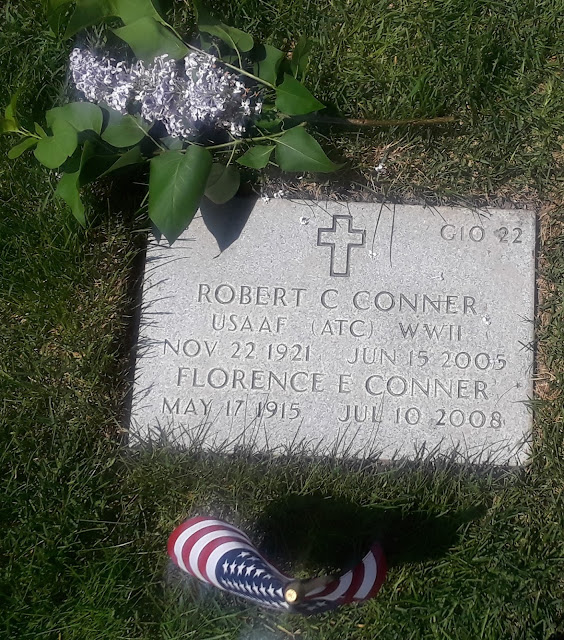 Varicose veins kept my father out of the US Navy, and for most of his life he would have denied serving in the military at all. Eventually, however, the government decided otherwise, which is why today his grave with that of my dear stepmother can be found in Saratoga (NY) National Cemetery. He was never in combat, and would have thought it preposterous to brag about his role in the war, well aware as everyone was of the sacrifice borne by so many. He hadn't met his first wife yet, and never saw her brother, my 19-year-old uncle Joe Gaffney, who was killed fighting with Third Army in the Ardennes.
My father just went to work for Pan American World Airways, staying with them for the rest of his career until, as the company was spiraling into dissolution, it laid him off in the early 1980s. In World War II, as the government eventually decided, that meant he was attached to
Air Transport Command of the United States Army Air Force. He served on military transport planes (Douglas C-54s, I believe) with regular routes from Newfoundland or Bermuda through a base in the Azores to Casablanca, North Africa. 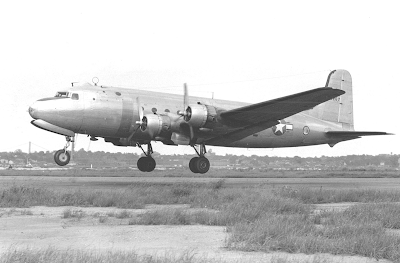 He must have heard have heard the joke about another mid-Atlantic base,
"If I don't hit Ascension,
My wife will get a pension."
He was the navigator, and 22 years old.

We walked around the cemetery a little, the wife leaving lilacs for some of those lost in our 21st century wars, and at the marker of an unknown New York soldier who was killed in 1862 at the Battle of Antietam.

From there we went to my sister-in-law Ruth Ann's grave at Greenridge Cemetery in Saratoga Springs, where also can be found Civil War soldiers.

That grand monument is all very well, but some of the graves tell a grim story. This lieutenant, for example, was killed at Fort Stedman (or Steadman, as the tombstone spells it) on March 25, 1865, defending against Robert E. Lee's last offensive. The war almost over, yet he had to die. 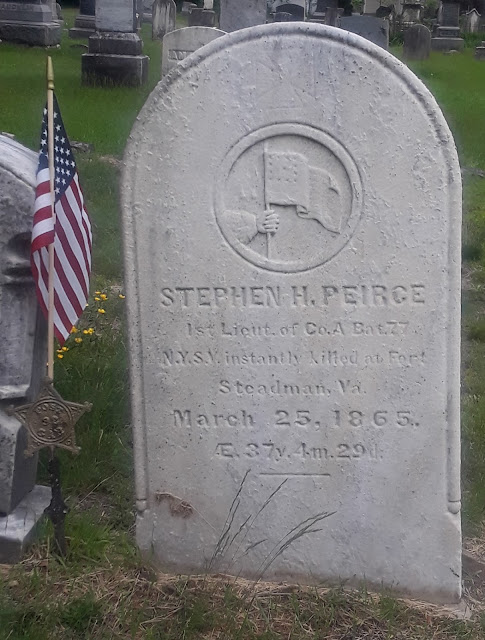 This soldier died in 1862 at Camp Griffin, Va., probably from disease. 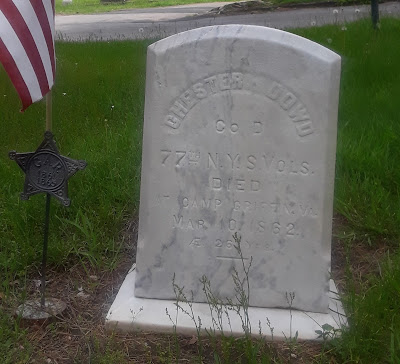 On today's date in 1863, the first of two unsuccessful assaults was made against the Confederate fortress of Port Hudson in Louisiana on the Mississippi River. The Union commander was Nathaniel Banks, who had succeeded Benjamin Butler. Both were political generals who never learned military competence and were retained too long. According to Wikipedia, the Union had casualties of about 5,000 killed or wounded during the one-and-a-half-month siege, but another 5,000 men died of disease. The deaths of most Civil War soldiers came from disease, not combat.
Grant was taking unnecessary casualties about the same time as Banks, directing unsuccessful assaults on Vicksburg, up the river; and Rear Admiral David Farragut lost ships and men running by Port Hudson in March. But Grant and Farragut could fight their way through to victory, whereas Banks and Butler generally produced defeat. Yet Port Hudson did fall, eventually.
One of Banks' subordinate generals, Thomas Sherman, lost a leg in the May 27 attack there. By his side was Captain Adam Badeau, who was shot in the foot. A writer before and after the war, who also became an undiplomatic diplomat, Badeau spent his military career as a staff officer. Twenty-two years later, he would play a key but unheroic role in The Last Circle of Ulysses Grant.

While the May 12-13 (1865) Battle of Palmito Ranch in Texas -- a Confederate victory -- is often called the last battle of the Civil War, homicidal violence plagued much of the South during Reconstruction and beyond, typically targeting freed slaves who sought to exercise their new civil rights.
Even the border states of Missouri and Kentucky proved hard to pacify. In Missouri, especially, as the famous career of Jesse James demonstrates, Confederate bushwhackers moved seamlessly into banditry, continuing to muddy the divides between war, peace and murder as they had been muddied by both sides since 1850s "Bleeding Kansas."
On today's date in 1865, not far south of St. Louis, US troops killed a man in a gang of store robbers led by bushwhacker Sam Hildebrand, who had a grim war record, and would continue his violent career until he was killed in 1872 in southern Illinois.
at May 22, 2019 No comments: 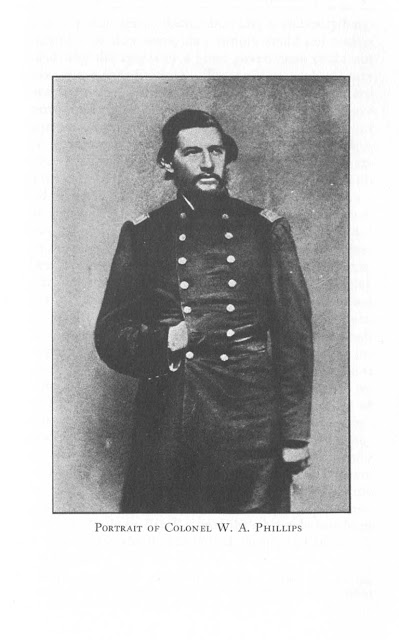 Phillips was an abolitionist activist in Kansas before the war -- like another obscure Civil War colonel, James Montgomery, whose biography I now happen to be writing. Somebody should write a book about Phillips, too. His careers included work as a journalist and a postwar member of Congress. He also served as a lawyer for the Cherokees after the war, and during it they made up most of his Indian Brigade. Those soldiers under his command deserve most of the credit for capturing and holding the Indian Territory for the Union, in the face of great logistical and other difficulties.
On today's date in 1863, for example, Phillips was fending off a Confederate attack near Fort Gibson. And he wound up dying at Fort Gibson in 1893, while conducting business for the Cherokees. 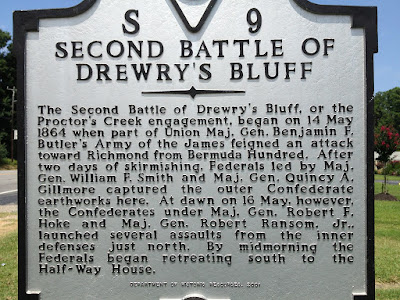 On today's date in 1864 Major General Benjamin Butler's Army of the James completed its retreat from this battle site to Bermuda Hundred, Virginia, where it was effectively bottled up (as Grant put it) by the Confederate army of Pierre Gustave Toutant-Beauregard, between the James and Appomattox rivers.
Beauregard was a better general than Butler, and won an important strategic victory in the May 16 battle. But Butler's subordinate major generals, Baldy Smith and Quincy Gillmore, helped stave off the rebel counter-offensive that day -- notably by Smith's pioneering use of wire (repurposed from the telegraph) as a defensive tool.
Smith, Gillmore and Beauregard were all West Pointers, and Butler's Civil War career is a prime example of how an untrained volunteer general who failed to learn from his military experience was a liability as long as he was retained in field command. However, Smith's own account, in my view, does not show either himself or Gillmore in much better a light. The two of them had reason to take umbrage at a stupid and insulting response of Butler's just before the battle, but not to let their amour propre get in the way of effectively working with him.
At Smith's suggestion to Grant via Sheridan, his corps was shipped north to join the Army of the Potomac, which was a sensible move. Unfortunately, things were not to run smoothly there.
at May 17, 2019 No comments:

The Bishop of Dubuque 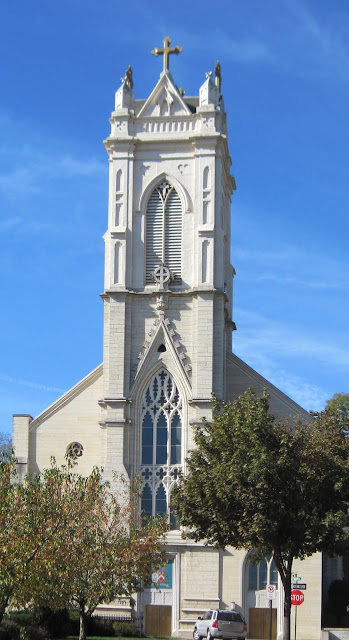 On this date in 1863, Clement Smyth, bishop of Dubuque, Iowa, demanded that Roman Catholics cease belonging to secret societies, including the pro-Confederate Knights of the Golden Circle. He may have said it from the pulpit of St. Raphael Cathedral (above), the construction of which he had recently overseen.
Dubuque, on the Mississippi River, was a Copperhead center in Iowa. At this point in the war opponents of the Union cause were active across the Midwest, taking strength from Confederate victories in the South.
Smyth, an Irish immigrant, was a consistent supporter of the United States government, which apparently provoked an arsonist to destroy his carriage house in 1865. While many Irish immigrants, from Confederate General Patrick Cleburne to some of the New York City draft rioters, were anti-Union, more of them -- like Paddy O'Rorke and Thomas Sweeny -- lined up with Bishop Smyth.
at May 03, 2019 No comments: