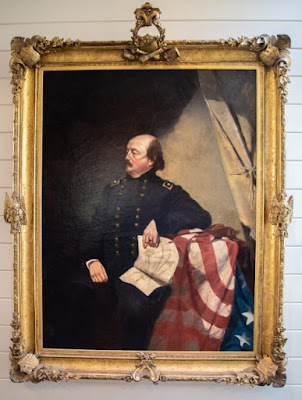 Well, the Civil War-era political general is in Albany County, NY, at the Curtain Call Theatre in Latham through February 8. It was sold out on preview and opening nights last Thursday and Friday, but we got in Saturday and found the play ("Ben Butler" by Richard Strand) well done.
The theater is about eight miles north of the state Capitol where Butler, despite being from Massachusetts, would have found himself at home. And the play's depiction of him as a canny lawyer and flexible politician, whose cleverness in 1861 made a real and positive (albeit somewhat accidental) contribution to freeing the slaves and winning the Civil War, might well appeal to Albany's fixers and bureaucrats, politicians, staffers, journalists, lobbyists and assorted hangers-on. If they can view him positively, so might the view in their own mirrors improve.
Butler was a general who failed to learn from his own military failures, and a politician whose stock is going up these days, although even going back to the first impeachment trial he got some positive along with the negative reviews. As for this production, I haven't seen any reviews yet, but give it a recommendation here.