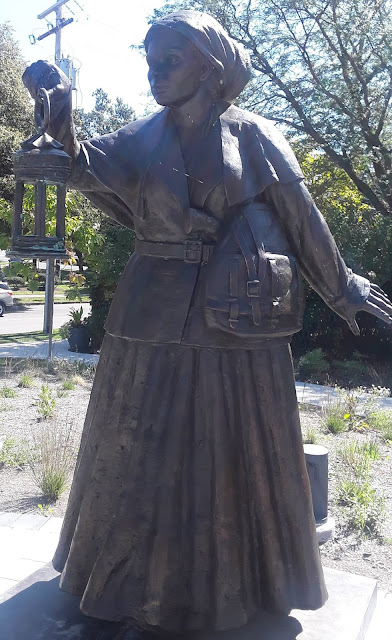 This lady with a lamp was put up late last year across from Auburn, NY, City Hall, next door to the house of Harriet Tubman's friend William H. Seward. His statue is a little farther down South Street, and her home, on land she bought from him in 1859, is farther down from that. It is now a National Park Service site. (The statue, unfortunately, is on the property of a new Equal Rights Heritage Center opened recently by New York State. The displays at the state site, as I discovered on a visit yesterday, unhistorically and heavy-handedly try to link the modern movement for abortion rights to the activism of 19th-century women such as Tubman.)

Another statue went up recently in Schenectady, NY, of Tubman and Seward together.
Since, as I was arguing the other day, it is generally a bad idea to tear down historical statues, and a better one to provide context and new memorials to tell the story of the Civil War, I am glad to see these representations of Tubman, and do not regard them as politically correct window dressing.
Her voluntary wartime service is not as well known as her work on the Underground Railroad, but is just as important and admirable. In one 1863 raid in which she participated on the Combahee River in South Carolina, which was commanded by Col. James Montgomery (whose biography I am currently writing), more than 750 slaves were freed. That is at least twice and probably several times as many enslaved people as the total number she had brought to freedom before the war.

This tiny (under five feet), illiterate, epileptic (the apparent result of a head injury inflicted by an overseer in her youth), middle-aged, dark-skinned black woman, born and raised in slavery, provided valuable intelligence on multiple occasions to Montgomery and other Union officers, risking her own life and freedom in so doing. She also served additional roles through most of the war to Union soldiers and freed slaves, primarily as a nurse but also as laundress, cook and mentor. After the war, she farmed and did other work in the Auburn area, eventually opening an infirmary and a home for the aged on her property.

I took this photo at Stonewall Jackson Lake a couple of days ago, on September 16. It is in north-central West Virginia, where Thomas J. Jackson was born and had to endure a very hard childhood -- although West Virginia did not exist at that time. It was actually Virginia where Jackson was born and raised, and to whose flag he rallied in 1861, unlike most of his near neighbors who rejected the Confederacy and welcomed the 1861 victories of George McClellan and William Rosecrans which paved the way for the new state of West Virginia. But the white population was divided in all the border states, Union Kentucky, Maryland and Missouri, as well as Confederate Virginia and Tennessee, with some going north and some south. The divisions remained after the war.
There is controversy now about Confederate memorials, including two statues of Jackson in West Virginia, one of which is outside the state Capitol in Charleston.
While some Confederate memorials are or were obviously problematic, for example the one that endorsed "white supremacy in New Orleans, and while it is odd that one of the great Confederate generals hailed from what became a Union state and is now memorialized at its Capitol, I do not endorse tearing it down. I think Jackson fought for the wrong side, and like the rest of us was a flawed human being, but that does not negate his admirable qualities.

In defense of the Jackson memorials, consider the case of a soldier from the other side, who volunteered as a private in the Union army at the age of 18 soon after the start of the war. William McKinley's first campaign, under Rosecrans, was in Jackson's home territory, helping West Virginia become a state. The next year, his 23rd Ohio regiment took heavy casualties at the battles of South Mountain and Antietam. He served though the rest of the war, ending up a brevet major, and from 1897 until his assassination in 1901 served as president of the United States. The highest mountain in North America was named after him by the US government in 1917, but in 2015 was changed back to Denali, which Alaskan Athabascans had called it. And in 2019, the city of Arcata, California, for no good reason tore down a statue of McKinley.
I think they should have kept McKinley's statue and his name on the mountain, and don't object to memorializing Jackson or Robert E. Lee. By all means add new statues of other people, along with context to old ones if necessary, but avoid heavy-handed propaganda. (See my September 20 follow-up post about Harriet Tubman.) James "Pete" Longstreet, a courageous ally of Grant's in Reconstruction, is one Confederate general who could do with more memorializing.
If the US government wants to get into the act, they might consider removing the name of a personally obnoxious and militarily incompetent Confederate general from what Wikipedia informs me is, by population "the largest military installation in the world" -- i.e. Fort Bragg in North Carolina. (Its population not long ago included a couple of my grandchildren who were born there.)

But I probably shouldn't encourage them, or we'll have to rename Washington, DC and state, not to mention the United States of America and anywhere else associated with a dead white male who cannot pass the ever expanding purity tests which are ever more comprehensively dictated by the lemon-sucking commissars of woke narcissism.
at September 18, 2019 2 comments:

The most famous Corning Tower is the Albany skyscraper, the centerpiece of Empire State Plaza, which is named after Erastus Corning 2nd, the long-serving 20th century mayor of Albany. But the city of Corning in the southern tier is named after another Erastus Corning, steelmaker, banker, politician and railroad king, whose son, also named Erastus, built a monument to him there 11 years after his death.
The original Erastus, like many New York Democrats, had an ambivalent attitude toward the Civil War, but prospered by it. His spendthrift son did not serve in the war. The son's grandson, for whom the Empire State Plaza tower is named, did serve in World War II. He later betrayed his constituents and benefited his own insurance company by letting Nelson Rockefeller build the Plaza on which his Tower stands.
Not far from Corning, NY, is Elmira, where on the graceful grounds of Elmira College sits the Mark Twain Study, a building which used to be attached to Twain's summer home nearby. Twain wrote most of his best work there, free from distractions. Olivia Langdon was from a wealthy abolitionist family in Elmira, graduated from Elmira College in 1864, and married Samuel Clemens in 1870. Clemens (Twain) famously deserted from a Confederate militia company and wisely avoided most of the Civil War by Roughing It out West, where he laid the foundation of his literary career. He is a character in The Last Circle of Ulysses Grant. 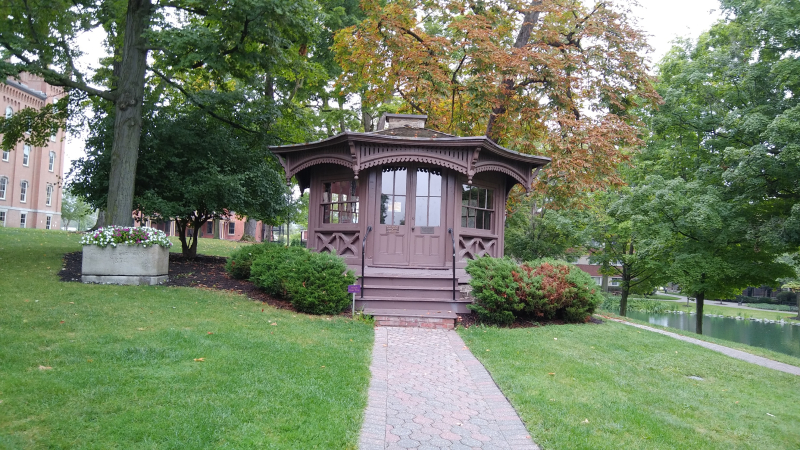 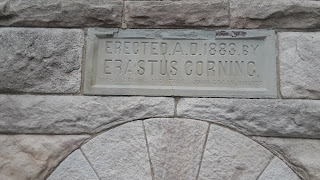 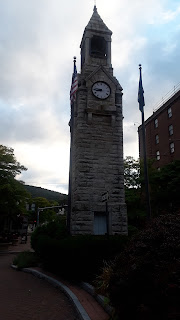