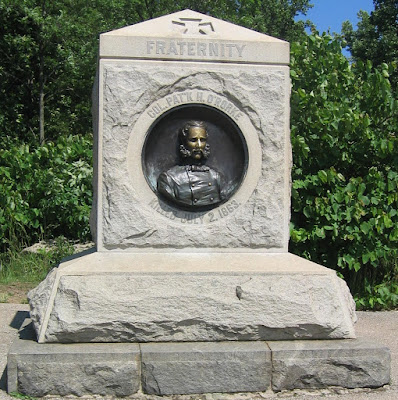 Patrick O'Rorke was born on this day (March 28) in Ireland, emigrating as an infant to Rochester, NY. He graduated first in the West Point class of 1861 (George Armstrong Custer came in at the bottom).
On July 2, 1863, the second day at Gettysburg, Col. O'Rorke was commanding the 140th New York Volunteer Infantry Regiment. Ordered by Brig. Gen. Gouverneur Warren (whom he knew) to assist in the defense of Little Round Top, he at first objected that he was supposed to be following his brigade led by Brig. Gen. Stephen Weed (another upstate New York West Pointer).
"Never mind that, Paddy," said Warren. "Bring them up on the double-quick and don't stop for aligning. I'll take the responsibility."
O'Rorke led a counter-attack charge on his own responsibility which stabilized the Union line, during which he was killed. His brigade commander Weed was mortally wounded a little later on top of the hill (as directed by Warren), as was the commander of another brigade, Col. Strong Vincent. One of Vincent's regiments was the 20th Maine, led by Col. Joshua Lawrence Chamberlain. Little Round Top was held, protecting the left flank of the Union army. The three-day battle had higher casualties than any other in the war. It was also, along with the simultaneous capture of Vicksburg a thousand miles away, the war's military turning point.

Weed was 31 years old at the time of his death. Vincent and O'Rorke were both 26. 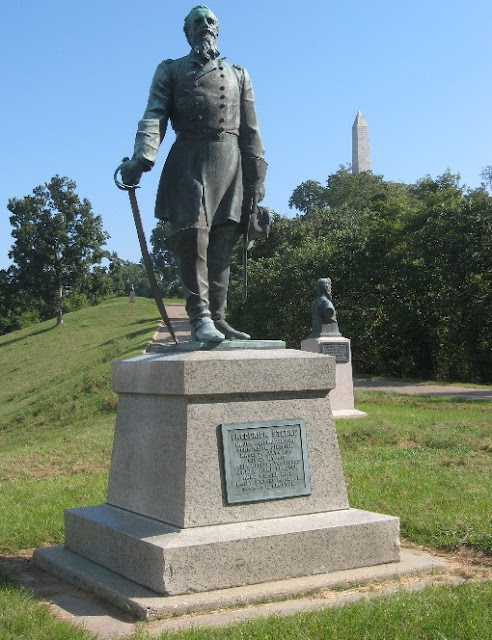 Frederick Steele's Union army moved south from Little Rock, Ark. (which he had captured the previous September) on today's date in 1864. The flawed plan developed by Henry Halleck in Washington was for Steele to link up with another Union force led by Major General Nathaniel Banks.
Banks, in coordination with the Navy, was advancing northwest up the Red River in Louisiana. Steele could get no farther than Camden, Ark., where he learned that the Red River expedition had come to grief, and only with hard fighting did he get most of his men back to Little Rock. But his campaign was less disastrous than Banks'.
The Encyclopedia of Arkansas is not a great fan of Steele, and makes the odd claim that later in 1864 he remained "A conservative Democrat who opposed emancipation". By the spring of 1865, Steele was successfully leading a largely African-American corps in combat near Mobile, Alabama, and it is frankly inconceivable that he favored returning those men and their families to slavery. By 1864, the North -- including its soldiers in the field -- was turning abolitionist, and while Steele had to appease some pro-slavery unionists in Arkansas, I doubt he fully accepted their opinions.
at March 23, 2019 No comments:

The Battle of Bentonville 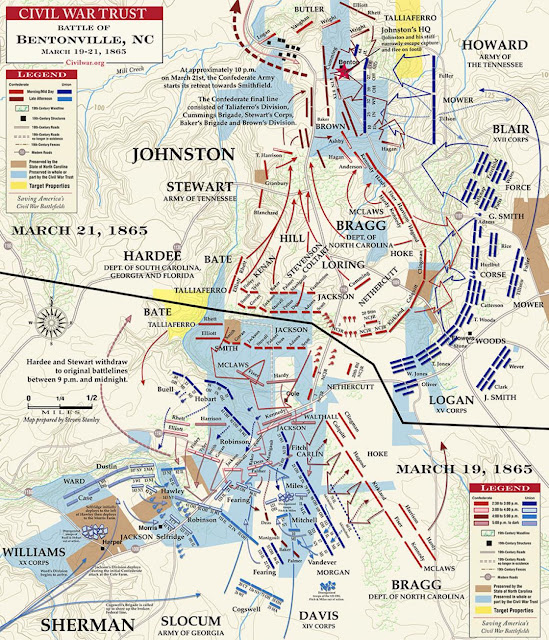 The generals -- from Joe Johnston and Cump Sherman down to anyone in command of so much as a brigade -- all knew that the war which they had been fighting for four years was effectively over by this date in 1865. Yet Johnston obeyed Robert E. Lee's order and took the opportunity to attack. He tried to pick off Sherman's left wing, which was commanded by Henry Slocum.

Sherman had gone off with the right wing, dismissing concerns by Slocum's XIV Corps commander Brig. Gen. Jefferson Davis that he was running into trouble (though the trouble was ultimately contained by hard fighting). For a genuinely great general, Sherman never showed much skill in battlefield tactics -- but then you could say the same thing about Dwight Eisenhower.

Johnston made up for his aggression at Bentonville a month later, when he wisely ignored instructions from the other Jefferson Davis (who unlike every almost every soldier in the field appeared to think there was a point in continuing to fight after Appomattox), and surrendered to Sherman. (Both the Confederate president and the Union general, then a colonel and a noncom, respectively, in the US Army, had fought on the same side in the Mexican War Battle of Buena Vista.)

Sherman, whom some have criticized for lack of aggression in counter-attacking the Confederates at Bentonville, was proven right by that surrender. Several hundred men were already killed at the battle, which affected the war's outcome not a jot. Sherman knew there was no reason to kill any more.
at March 18, 2019 No comments: 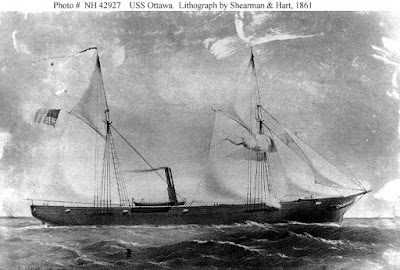 The 158-foot US gunboat Ottawa steamed into possession of Jacksonville, Florida, on this date in 1862. Commanded by Lt. Thomas H. Stevens (the son and father of senior naval officers, who himself would retire as an admiral), the Ottawa had fought at Port Royal the year before. From Jacksonville it went on patrol down the wide St. John's River into the interior of northern Florida.
Stevens' next service was providing close support to the Army in Gen. George McClellan's Peninsula Campaign in Virginia. After a spell of vigorous blockade enforcement, Stevens was in in 1863 bombarding Charleston harbor. The next year, he commanded the ironclad Winnebago in the Battle of Mobile Bay.
Control of Jacksonville, meanwhile, passed back and forth several times during the course of the war. One Union soldier who went through it several times was Col. James Montgomery, whose biography I am currently writing.
at March 12, 2019 No comments: 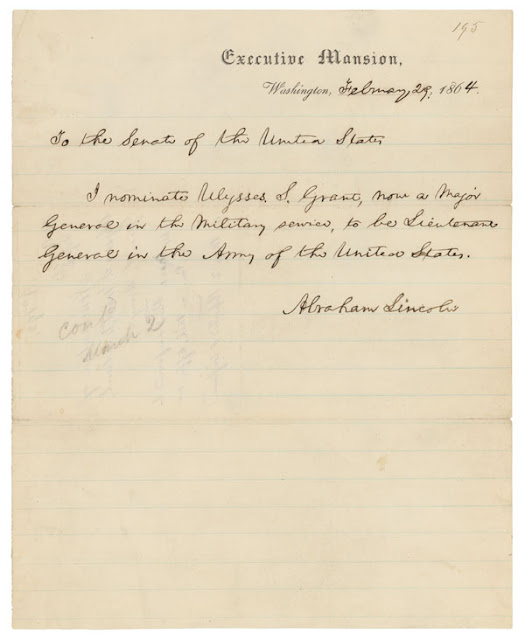 That happened on Feb. 29, and the Senate confirmed him on March 2, which is 155 years ago tomorrow.
Feb. 29 also was the date Lincoln signed a bill reviving the rank of lieutenant general  which was sponsored in the House by Elihu Washburne, home state representative and friend of both Lincoln and Grant. Washburne had assured Lincoln that Grant would not run for president against him in 1864.
In 1869, Washburne would begin serving as President Grant's longtime ambassador to France. Unfortunately, both men had presidential ambitions in 1880, which ended their friendship -- the thought of which flickers across the general's mind in The Last Circle of Ulysses Grant.

Winfield Scott, George McClellan and Henry Halleck had played similar command roles already in the war, with varying degrees of success. Grant, like them, would have failures on his watch, notably at Cold Harbor and the Crater, and was saved by Halleck's caution from a faulty personnel decision at Nashville (i.e. almost firing George Thomas).
But he had larger successes. Some came through hand-picked subordinates, mainly Sherman, who was permitted by Grant to march to Savannah. Yet the final campaign was under his own control, ending the war at Appomattox.
at March 01, 2019 No comments: