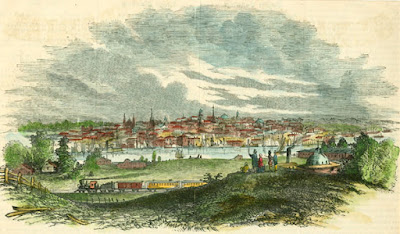 [View of Albany from east side of the Hudson River in Gleason’s Pictorial Drawing-Room Companion, Courtesy of The Gilder Lehrman Collection, New York]
Lincoln's long pre-inaugural railroad tour took him all through New York state, with the first stop in its far west at Westfield, where the now bearded president-elect met the apparent inspiration for his now iconic look, 12-year-old Grace Bedell.
There were multiple stops and appearances over several days of travel through the state, including an overnight in Albany Feb. 18-19. Why, then, did he go to Troy the next day, which is north of Albany, the opposite direction from his ultimate destination in Washington? Because the water was too high in the Hudson at Albany, where passengers normally crossed by ferry before taking the train down the river's eastern shore.
The Hudson River Bridge Company started building a railroad bridge in Albany during the Lincoln administration. It opened the year after he died, and was replaced in 1901-02. That 117-year-old Livingston Avenue Bridge remains in operation today on Amtrak's main line, taking passengers and freight from Manhattan to Canada, or to Chicago, where they can travel on to Seattle or California, or take the line down to Little Rock and Dallas, which remain part of the United States of America. The bridge's long-dead builders are far closer to Lincoln's age than to our own. 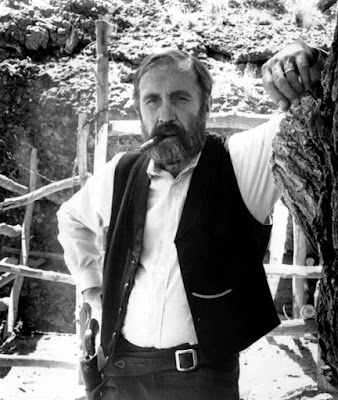 Jason Robards voiced Grant in Ken Burns' justly famous Civil War documentary for PBS, and also played him in a movie about the Lone Ranger which nobody saw. He was, I had not realized until recently, a World War II combat veteran of the US Navy who was very lucky to survive two Japanese attacks.
I used to think the late actor Robert Shaw resembled Grant, but he didn't get to play him. Shaw was never in combat, but like Robards and possibly Grant, he was an alcoholic. And he played a veteran of the 1945 USS Indianapolis disaster in the movie Jaws. 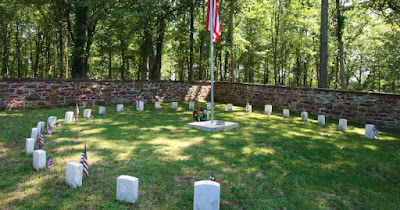 On this date in 1862, a Union brigadier general, Charles P. Stone, was arrested and put in prison, where he would remain for more than six months without any charges being filed. This injustice did much to make people of good will suspicious of  the politicians who brought it about following Stone's defeat at Ball's Bluff the preceding October. A small part of The Army of the Potomac fought there on the banks of the river after which the army was named.
The battle was the result of what was essentially a Union raid, and likely made McClellan an even more cautious general than he was already inclined to be. It has some similarities to another raid-battle conducted a couple of weeks later (Nov. 7, 1861) on an even more famous Civil War river, the Mississippi, where Grant generalled his first real fight at Belmont, Missouri. Unlike Ball's Bluff, Belmont was not a defeat, but it was not a victory, either. (However Grant, unlike Stone, was with his troops in battle.)
While Stone's treatment by scapegoat-seeking politicians was outrageous, that does not absolve either him or his superior, Major General George McClellan, of responsibility for the outcome of Ball's Bluff. They blamed a scapegoat of their own, Col. Edward Baker -- a politically inexpedient choice, since Baker was a) killed in the battle, b) a sitting US senator, and c) a close friend of Abraham Lincoln. McClellan also hung Stone out to dry, in part based on intelligence from Allen Pinkerton, a notoriously incompetent spy whose main claim to fame was inflating estimates of Confederate troop numbers (which increased McClellan's caution to an almost paralytic state).
Perhaps the focus belongs not on the squabbling leaders but the unheralded soldiers who lost their lives, which is where Herman Melville put it in his poem, Ball's Bluff: A Reverie:

One noonday, at my window in the town,
I saw a sight — saddest that eyes can see —
Young soldiers marching lustily
Unto the wars,
With fifes, and flags in mottoed pageantry;
While all the porches, walks, and doors
Were rich with ladies cheering royally.

They moved like Juny morning on the wave,
Their hearts were fresh as clover in its prime
(It was the breezy summer time),
Life throbbed so strong,
How should they dream that Death in rosy clime
Would come to thin their shining throng?
Youth feels immortal, like the gods sublime.
Weeks passed; and at my window, leaving bed,
By nights I mused, of easeful sleep bereft,
On those brave boys (Ah War! thy theft);
Some marching feet
Found pause at last by cliffs Potomac cleft;
Wakeful I mused, while in the street
Far footfalls died away till none were left.
at February 09, 2019 1 comment: 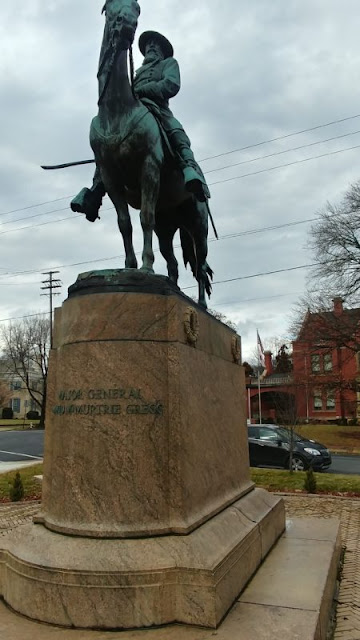 On this date in 1865, US Major General David Gregg rode out into his last engagement, beginning the Battle of Hatcher's Run -- part of Grant's long siege of Petersburg, Virginia. Days before, Gregg, a West Point regular officer, had resigned his commission. So he would miss the Appomattox campaign in April, but would remain well respected.
Gregg had fought in the vicinity of Hatcher's Run the previous October alongside Major General Winfield Scott Hancock, who shortly after gave up field command. Both battles contributed to the weakening of Confederate lines at Petersburg, and thus to the eventual success of Grant's campaign.
Hancock stayed in the Army another two decades and more, but Gregg was out for good. Both men had fought well all through the war, and were worn out.