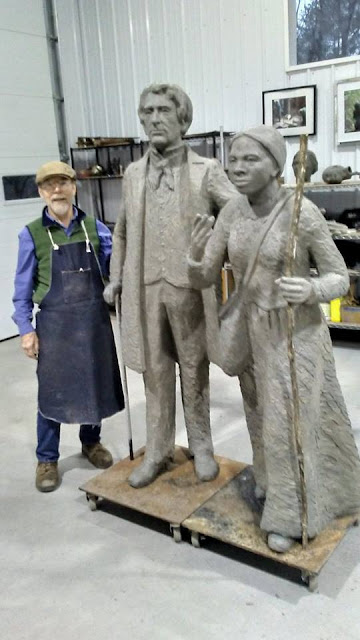 A new sculpture by Dexter Benedict of William Henry Seward and Harriet Tubman is scheduled to be installed on May 17 outside the main branch of the Schenectady Public Library. It looks good to me.
Seward was a graduate of Union College in Schenectady, NY, and while I am not aware of any connection Tubman may have had with the city, she was definitely connected to Seward and his home town of Auburn, farther west in upstate New York. The National Historical Park there is a work in progress, which I hope to visit this year.
That's partly because I am writing a biography of Tubman's friend US Col. James Montgomery, under whose command she served on the Combahee River raid in 1863. Almost 19 months later, on yesterday's date in 1865, Sherman's army skirmished with Confederates in that area as it moved up through South Carolina.
at January 29, 2019 No comments: 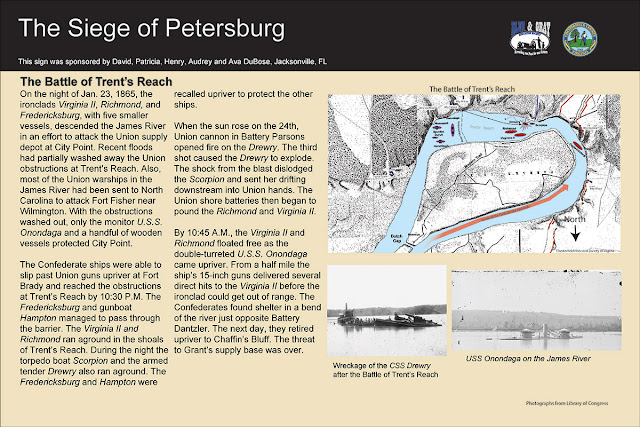 The famous battle between the ironclad ships Monitor and Virginia (or Merrimack) was in March 1862. After that, the Union navy used ironclads in offensive operations, but the Confederates not so much.
However, on today's date in 1865, three ironclads led an 11-ship Confederate fleet down the James River with the objective of destroying Grant's US Army base at City Point.
The Union had shore batteries at various points, including Trent's Reach where the main battle took place. It also, of course, had ships to defend the river, but fewer than previously or subsequently because many had gone to help capture Fort Fisher in Carolina. And of the ships it did have ready to deploy, only one, the Onondaga, was ironclad.
Four of the Confederate ships, including two ironclads, went aground, and Grant energetically prodded the US Navy into putting its fleet into action. The result was that the Confederates lost two ships, had two others badly damaged, and were forced to retreat.
The offensive got the attention of Lincoln, who dispatched Admiral David Farragut to the scene. The aging war hero, who had been largely inactive since his great victory at Mobile Bay the previous August, arrived after the fighting at Trent's Reach was done.  He inspected the Onondaga, as one Irish crew member reported.
Farragut, the sailor said, "who looks hale and hearty, smiled approvingly on the heroes of Dutch Gap, as he paced the deck of our 'Iron Leviathan.' He had a short stay, but was evidently well pleased."
at January 23, 2019 No comments: 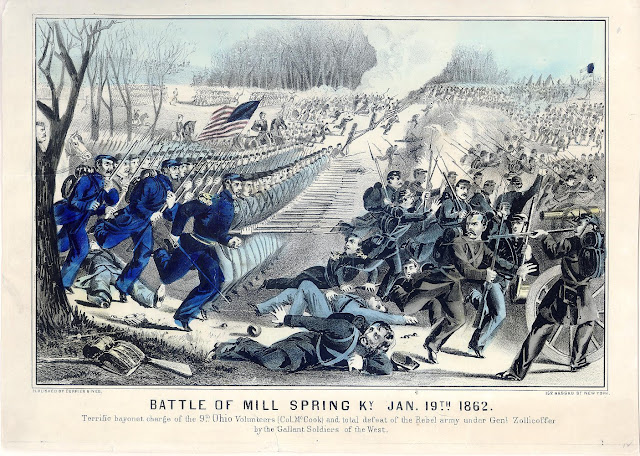 Nine days after Middle Creek, Eastern Kentucky was secured for the Union on this date in 1862 at the Battle of Mill Springs.
A bayonet charge by the 9th Ohio Volunteer Infantry was a key factor in the victory, and that regiment would undertake two similar charges in 1863 at Chickamauga. By then it was commanded by Col. Gustav Kammerling, who was also at Mill Springs. Like most of his men, he was a German immigrant who went home to Cincinnati when their three-year enlistment expired in 1864.
Kammerling is brought up by Tom Sweeny in conversation with Frank Herron, Ely Parker and others in The Last Circle of Ulysses Grant.
The Confederates retreated after Mill Springs to Murfreesboro, Tennessee, where a major battle was fought at the end of the year (after the Confederates had advanced back into and then retreated from Kentucky). General George Thomas, who had commanded the Union army at Mill Springs, would play major combat roles at both Murfreesboro and Chickamauga, and reviewed the 9th Ohio when it mustered out in Georgia.
at January 19, 2019 No comments: 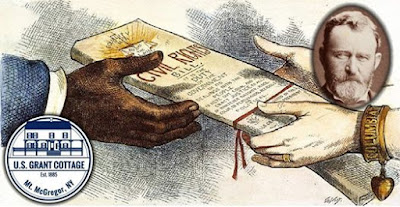 I'll be attending the moderated discussion group on this topic today, Friday Jan. 18, from 2 to 4 p.m. in the Susman Room at the Saratoga Springs Library. It is open to the public.

The Battle of Middle Creek

Today (Jan. 10) is the anniversary of the Battle of Middle Creek, in which Col. James Garfield earned promotion to general, and helped secure eastern Kentucky for the Union. It was a very minor affair compared to Shiloh three months later, where Garfield arrived at the very end, and compared to Chickamauga, which he saw more of. From then he was in Congress until entering the White House, serving all too briefly before being felled by an assassin's bullet.
Garfield underestimated both Lincoln and Grant, and was far from a reliable supporter. His worst misjudgment was opposing the Ku Klux Klan bill in 1871, and his presidential victory in 1880 came at the expense of Grant's bid for a third term. Yet as president he supported black civil rights, and it seems likely he would have done more to secure them than his successors did.

On Jan. 6 and 7 1861, New York Mayor Fernando Wood proposed to the City Council that the city secede from the Union in sympathy with the southern states (of which only South Carolina had yet voted to leave the United States).
That didn't happen, and New Yorkers rallied to the Union cause after the attack on Fort Sumter in April. But two years later, they stabbed the Union in the back in the murderous anti-black draft riots.
By then, Wood was a Copperhead Democrat member of Congress, in which capacity he would go on to oppose the 13th Amendment abolishing slavery, as recounted in Steven Spielberg's fine movie, Lincoln.
Wood is mentioned in the novel, but even if he hadn't died in 1881, there is no way he could have been part of The Last Circle of Ulysses Grant.