Juneteenth as a Hopeful Symbol of National Unity 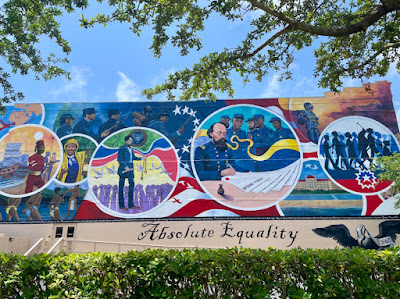 In June 1861, when the jayhawker James Montgomery was commissioned by the governor of Kansas as “Colonel of the Third Regiment of Volunteers for the United States Service,” he was joining up to fight for the abolition of slavery. He was soon recruiting Black teamsters in 1861 and Black soldiers in 1862, and by 1863 and 1864, most of the troops he commanded were African-American. They joined the Army for the same reason he had, to abolish slavery.

But that did not apply to most northern soldiers in 1861, who volunteered to preserve the Union, and were suspicious of – or recoiled from -- radicals like Montgomery and his now deceased comrade John Brown who had helped bring on the war.

Nor did Abraham Lincoln, the country’s new anti-slavery president, describe himself as an abolitionist. Prior to the Confederate attack on Fort Sumter, he was trying to avoid the approaching conflict, reasonably fearful of its terrible cost. And when the war started, he reasonably calculated that immediately embracing abolition would guarantee a quick Confederate victory, because it would alienate more potential supporters of the Union than it would inspire, especially in the armed forces and the border states.

The North was radicalized on this issue through the course of the war, with Lincoln’s Emancipation Proclamation, which became effective on Jan. 1, 1863, as the key turning point. Frederick Douglass, the Black abolitionist whose son Lewis would fight under Montgomery’s brigade command, thought January 1 should be celebrated forever as the end date of slavery. But first the war had to be won.

And in Lincoln’s birth place, Major General Gordon Granger, commander of the federal Army of Kentucky, was worried that the state was about to secede in protest against the Emancipation Proclamation. His superior General Horatio Wright sent a message from his headquarters in Ohio to General Henry Halleck in Washington on Dec. 30, 1862, discussing plans, if necessary, to arrest Kentucky judges and legislators.

In June 1863, Montgomery led a raid up the Combahee River deep into South Carolina, west of Charleston. Accompanying him was Harriet Tubman, who played a key role as a civilian intelligence agent and guide, and helped organize the enslaved people who were fleeing from plantations to the two Navy boats – despite Confederate fire which killed at least one of them, a girl. Both Montgomery and Tubman had become famous before the war in separate endeavors to bring slaves to freedom, but those prewar numbers were dwarfed by the almost 800 slaves freed in this one raid.

Montgomery went on to fight at the siege of Fort Wagner and, in 1864, at the battles of Olustee and Westport. The more senior Granger fought in the Tullahoma campaign of 1863, at the battles of Chickamauga and Chattanooga, and around Mobile.

Meanwhile, the abolitionists continued their political work. On April 8 1864, the U.S. Senate voted 38-6 to pass the 13th Amendment to abolish slavery. On June 15 it passed the House 93-65, short of the required two-thirds majority. Also in June, the Republican party platform included and Lincoln endorsed an abolition plank, framing it as necessary to support the Union. The issue was debated in the campaign, which was won in November by the Republicans including Lincoln. He immediately made House adoption of the 13th Amendment a top priority, which was achieved by a vote of 119-56 on Jan. 31, 1865.

In early to mid 1864 Lincoln had thought his re-election unlikely, but battlefield victories helped the Republican cause. And even though his Democratic opponent George McClellan retained considerably popularity in the Army, the soldiers’ vote went heavily for Lincoln.

There is no record of the word “Juneteenth” appearing in print during the lifetimes of Montgomery or Granger. It was an African-American dialect word deriving from the date, June 19, 1865, on which General Order No. 3 was issued by Granger, the new commander of the District of Texas.

Granger had arrived by ship in Galveston two days previously with 1,800 troops to assert federal control over the largest American state. Texas, unlike most of the Confederacy, had not been conquered by the Union Army. Its ruling class, as shown by contemporary newspapers, remained unconvinced that the U.S. government would actually enforce the abolition of slavery, and thought some system of forced labor would remain in place. The enslaved people of Texas, many of whom had been brought there from other Confederate states, were unsure what would happen.

Granger was no ideologue. But he thought it necessary, on his own authority, to use language strong enough to make clear to everyone, White and Black, the position of the U.S. government: “The people of Texas are informed that, in accordance with a proclamation from the Executive of the United States, all slaves are free. This involves an absolute equality of personal rights between former masters and slaves, and the connection heretofore existing between them becomes that between employer and hired labor. …”

For the next decade and more, Republican politicians and the U.S. Army and law enforcement, including General and President Ulysses S. Grant, tried to turn expressions such as “absolute equality” into law and reality, in which efforts they were partly successful. Their allies included some courageous former Confederate soldiers, such as Grant’s attorney general, Amos Akerman, who led the campaign to smash the Ku Klux Klan in 1870-71, and James “Pete” Longstreet, Grant’s friend before and after the war. Longstreet led largely African-American police and militia who battled White League rioters in New Orleans in 1874, after which Grant sent in federal troops to restore order.

Yet Reconstruction ended with the Grant administration in 1877, and many of its gains were lost.

In Texas, however, Juneteenth was celebrated annually in Black churches, picnics and parades, becoming a focus of community self-help, creativity and empowerment. It spread slowly through the South, and contributed to a new civil rights movement, led by nonviolent African-Americans, which in the mid-20th century succeeded in dismantling Jim Crow abuses and restoring the advances lost after the collapse of Reconstruction.

Douglass, an admirer and ally of Grant’s, did not live to see a national holiday adopted to celebrate the end of slavery. When it did happen in 2021, 156 years after the end of the war, June 19 was chosen and not January 1, as he had suggested. Tubman has been proposed to replace the slaveholder and Indian-remover Andrew Jackson on the $20 bill.

In the 1980s a bipartisan political movement created a national holiday to honor Martin Luther King. Juneteenth was enacted last year on a similar basis, and there does not seem to be significant opposition to putting Tubman’s picture on U.S. currency.

But it may be helpful to clarify the issue. The Lost Cause school of Civil War history, highly influential for much of the 20th century, was broadly conservative and sympathetic to the South, idealizing its agrarian, aristocratic, chivalric qualities, while unfairly deprecating northern leaders such as Lincoln and Grant. It has something in common with its apparent opposite, the modern aesthetic reaction against “white savior” narratives, which is often combined with harsh judgment of Union leaders as insufficiently anti-racist by 21st century standards. Both viewpoints tend to minimize the extent to which the Civil War was about abolishing slavery.

The truth is that America’s costliest war – perhaps 750,000 dead -- was always about slavery. The initial cause was preventing its expansion, which both sides saw as likely to lead to its ultimate extinction. By 1864, with the war still raging, most northerners explicitly endorsed abolition. That became what Union soldiers, White and Black, were fighting and dying for. Those historical facts are not erased by the persistence of racism and the long-term difficulty of enforcing Granger’s proclamation.

While Juneteenth does celebrate the resilient courage of African-American culture in the long wake of slavery and Civil War, it also memorializes an immense national sacrifice.